Awards season is upon us again! The Sir Julius Vogel Awards are New Zealand’s only voted awards for science fiction, fantasy and horror fiction. Nominations are currently open for this year’s final ballot, and Paper Road Press has several eligible works …

Sneaking in at the end of the calendar year, the sequel to the winner of the 2015 SJV Award for Best Novel is eligible for the 2016 award. Check out the ebook today:

Pisces of Fate, by Paul Mannering

All six of the SHORTCUTS stories are eligible for this award:

The Last, by Grant Stone

The Ghost of Matter, by Octavia Cade

And because the SHORTCUTS stories were published as a collection as well as standalone novellas, we’ve got a look-in for this category as well: 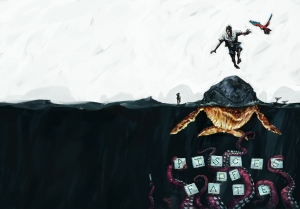 Cover artwork of Pisces of Fate, by Henry Christian-Slane

Nominations close 28 February, and it’s free to nominate any work. More details and instructions on how to nominate your favourite publications from 2015 can be found here on the SFFANZ website.

It is a truth universally acknowledged that a mother in possession of a surfeit of daughters must be in want of eligible bachelors. Less well documented are the extremes to which she might go if her daughters’ prospects are endangered by other neighbourhood beauties…

Murder & Matchmaking is a darkly comic mash-up of two classics: Jane Austen’sPride and Prejudice and Arthur Conan-Doyle’s The Adventures of Sherlock Holmes. The young ladies of Meryton are dropping like flies – can Lizzie Bennett solve the mystery in time? And who is this fancy London detective who has suddenly appeared on the scene?

Debbie Cowens is a Kapiti-based writer and English teacher. She co-authored the award-winning Mansfield with Monsters with her husband and her stories have been published in both New Zealand and international publications and anthologies.

Murder & Matchmaking is her first novel and it weaves together many of her favourite things: Jane Austen heroines, a Sherlock Holmes-inspired detective, mischievous canines and intrigues. She is a little surprised that more chocolate didn’t sneak its way into the narrative.

We are launching Debbie’s book in April, and to raise funds for a New Zealand print run (to get as many copies of the book into local shops as possible), we’re running a PledgeMe campaign to raise $1000 towards print costs. You can pledge to the campaign to pre-order your paperback or ebook copy of the book – or even have a character in the book named after you!

We at Paper Road Press are lucky enough to have grown up in homes where books were plentiful, but we know that this isn’t the case for many New Zealand children. To help support children’s access to books, and promote literacy and a love of reading, Paper Road Press donates 90% of profits from our award-winning collection Baby Teeth: Bite-sized Tales of Terror to Duffy Books in Homes.

With 2014 behind us, it’s time to report on our fundraising progress so far:

Baby Teeth: Bite-sized Tales of Terror won multiple awards in 2014, and we were all more than pleased to see the fundraising total double over the year from 2013. Whether that keeps up in 2015 is anyone’s guess (I’ve yet to hear of any awards for ‘creepy/funny horror story collections published two years ago’, but you never know), but we’ll let you know whatever happens.

Thanks to the hard work of Chris Barnes at Dynamic Ram Audio Productions, the audiobook of Baby Teeth: Bite-sized Tales of Terror is now available to purchase here on the Paper Road Press website. To celebrate, we talked to Dan, Lee and Debbie about their recent Australian Shadows Award wins…

Debbie Cowens, whose winning story appears in winning collection Baby Teeth, missed the initial announcement due to the time difference between New Zealand and Australia. “To be shortlisted for a AHWA Shadow award was far beyond my expectations and to be included alongside an impressive line-up of fantastic Aussie writers as well as fellow Baby Teeth SpecFicNZ writer, the talented JC Hart, was flattering and surprising. When I woke up to discover that I had actually won, the language with which I conveyed my astonishment would not be printed in a respectable publication such as this!”

Dan, who was the FFANZ delegate to Continuum X earlier this year, was similarly blown away by the results. “I think I speak for all of us when I say that I was in a state of shock when we won this award, and a state of euphoria when Debbie won Best Short Story. This state – shocked euphoria – was rather confusing, but I think I’ve come out the other side now. Settled into just being quietly stoked. For a little book from New Zealand to have come from such humble beginnings and to win not one but two categories in a major Australian award is fantastic, and we can all be proud to be a part of that.

“I’d like to thank the AHWA (Australian Horror Writers Association) for running these awards, and for making it open not only to New Zealanders but also to all Oceania residents. In a time when the SF/F/H community is crying out for more diversity in genre fiction, respecting and inviting the contributions of our wider Pacific community in a highly-esteemed awards program like the Australian Shadows is a big step forward in this direction. Good on you, AHWA.”

Co-editor Lee agrees. “If you could just write ‘we’ everywhere Dan has said ‘I’ because his comments are a fair representation of how I’m feeling. ‘Humbled’ is another word that comes to mind.”

Baby Teeth: Bite-sized Tales of Terror was Paper Road Press’ first release, published at Halloween 2013. A horror collection with a difference, Baby Teeth features 37 snappy short stories about the creepy things kids say and do – and all proceeds from sales of the book are donated to Duffy Books in Homes. Creepy stories about kids, supporting kids, but definitely not meant to be read by kids – it’s a strange niche, but with an Australian Shadows Award and a Sir Julius Vogel Award under its belt and several prize-winning stories between its covers, one that seems to have struck a chord with horror fans.